As per ircpuzzles tradition, the first puzzle is simply a base64-encoded string. This particular one decodes to: ######AFPC2018-VideoGames.

This level introduces channel keys. The solution was to join ######locked with the key this.

Clues: It's dangerous to go alone.

As established in the entry channel, this year's theme was video games. The line from the topic is a reference to a very early screen in the original Legend of Zelda game. The complete line from the game includes Take this. at the end. The solution channel was ######takethis.

Originally, this level only contained the first clue - part of a line in plain sight, and part of it obscured by rot13. The full line decodes to It is pitch black., a reference to Infocom's text adventure title Zork.

One of the mechanics in the game was pitch black rooms that needed a lamp to navigate. Should the player venture forth without one, they would be eaten by the game's iconic monster - a grue.

Every time the player enters a very dark area without a light source, the game warns them about this gruesome fate: It is pitch black. You are likely to be eaten by a grue. The second hint is exactly the rest of this reference with grue replaced by ...

Clues: This company released a console which shares its name with an epic.

This level was a more straightforward fact-hunt rather than decoding clues and recognizing or searching for a given reference. The epic in question is Homer's Odyssey - a major Greek poem and sequel to the Iliad.

The company in question is Magnavox, who in 1972 released the first home video game console, the Magnavox Odyssey.

Clues: eHl6enkK | response | what you did in the first one

This level originally contained only the first clue, which (like the first level) is encoded with base64. It decodes to xyzzy.

The second clue here makes clear that we were looking for a response to the xyzzy command. Thus, the next level was: ######nothinghappens

The result is ######easyascake which you can get by seeing what potential words 3279 27 2253 would generate with T9 - the following “It really is, isn’t it?” helping to confirm you got the right one.

This level uses a Nonogram puzzle to hide a sprite from the 1978 arcade game Space Invaders.

This one was a bit trickier. C’FGC is a draft from LucasArts' point-and-click adventure LOOM. A web search for C’FGC together with video games was supposed to put players on the right track. Later in the game, however, another more obvious clue was added. Bobbin is the name of the protagonist in LOOM.

In the game, the C’FGC draft is called Transcendence, and therefore the next level is ######transcendence.

This level's topic underwent several drastic changes in the course of the competition. The one you see here is the final one. Originally, the topic only consisted of the first clue.

This puzzle relied on players having seen the memorable URL slugs certain websites use for their content. In this particular case, the clues linked to a gif on gfycat: https://gfycat.com/DifficultFarflungIslandwhistler

The last step was to identify the move portrayed in the gif, which was Ryu's Hadouken. This makes the next level: ######hadouken.

Originally, this level only included the first two clues. The first one is an excerpt from one of the songs in Monty Python and the Holy Grail. In the film, Sir Robin is first being hailed by his entourage as being exceptionally brave, until he encounters a three-headed knight and runs away. Following Robin still, the minstrel then derides him, singing that he bravely chickened out.

The second one, keeping in mind the video games theme, alludes to Conway's Game of Life (with the third and final clue confirming this).

Sir Robin is a spaceship in Conway's Game of Life found very recently - and the first elementary knightship encountered.

Clues: In a game with a helpful Error, a bug by his name gave you something to show to … | If all else fails, use fire

The game we are looking for is The Legend of Zelda II: The Adventure of Link for the NES, a childhood favourite of mine. The game had two oddly named characters: Error and Bagu, the latter coming from bug (as in software bug). 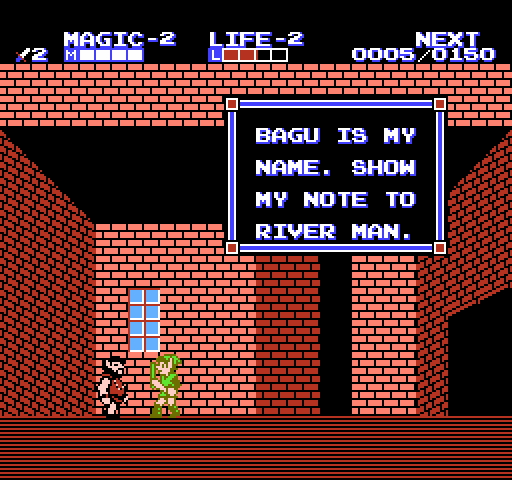 The second hint is from the very same game and makes the solution more googleable.

A slightly harder riddle. Roses are 0°, violets are blue, walk in circles to find the clue is a hint towards a (hue) colour wheel, where red is located at 0°.

As unfortunately every piece of software places 0° at a different position and some even rotate counter clockwise, the hint Green meadows in the east, blue waters in the west, icy cyan in the south... gave you the correct colour circle.

If you draw lines from colours separated by - and make a letter for each comma-separated colour value, you'll end up with: 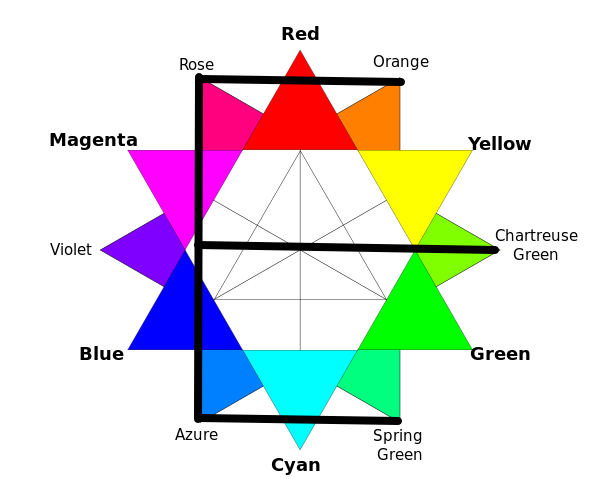 This gives you the channel name, ######HUE. The last hint shows you that you got the right solution.

Here we were looking for a character from the Sonic The Hedgehog video games series. Gotta go fast is Sonic's motto. However, MPH and fly high point towards someone else: Sonic has a fox sidekick, called Miles Tails Prower. His theme song, fly high, was used in Sonic Adventure.

As you can see in [his wikipedia article](https://en.wikipedia.org/wiki/Tails_(character), his full name Miles Prower is a pun on miles per hour, MPH. Using his two tails he can fly short distances. Thus she answer was ######tails.

The song in the topic is a vague reference to the Konami Code, which allowed you to obtain 30 extra lives in the NES version of Contra.

This puzzle was a very obscure one, and originally only the first clue was presented.

Valve's own anti-cheating system (VAC) together with the puzzle theme was meant to lead players to think about banning, or getting banned.

On IRC, one can inspect the ban list using the /mode +b command, which revealed a hidden clue: valve!*@*time* banned by ircpuzzles.

Clues which were added later all hinted towards using the /mode command in the channel itself.

Clues: What kind of beast would get really close to you, just to step back and back again and kick you with No Mercy? | What a rare gem both of these were. | Trust your instinct, preserve your energy

Quite a hard puzzle, looking for a character of the fighting game series Killer Instinct. It was developed by Rare, which the hint What a rare gem both of these were pointed at. Said hint also helped at the end, since Rare developed, in its early days under a different name, a game named after the solution - Sabre Wulf.

Like Mortal Kombat, Killer Instinct had a finishing move to kill the opponent. These were called No Mercy moves, and used a key combination to trigger. The character Sabre Wulf had the combination Back, Back, Kick when standing close to the enemy, which the clue hinted at.

Another hint helping to find the right game was trust your instinct, preserve your energy - the former hinting at Killer Instinct itself, the latter hinting at the game being special compared to others as players preserve their energy bar after winning the first of two rounds.

The solution channel was: ######sabrewulf

Clues: Interlude: I'm sitting at the table, expensive cutlery in front, but a bit further just a canned food to eat. I look at the nobles across, the poor person on the left, the rich person to the right, and what appears to be a German next to him. The person a bit behind me knows all the answers. It's the seat on their left, their surname and the seat on their right. | Maybe it would help if you sat at a table regularly as well | in the end a black bird will guide the way | no more hints, PERIOD

Arguably the hardest interlude. People should look for the periodic table of elements, as hinted at by Maybe it would help if you sat at a table regularly as well, regularly being a synonym for periodically. As this hint was not sufficient for everybody, no more hints, PERIOD was added later on.

It starts at 46, Palladium, which has Silver and Gold (expensive cutlery) in front. A bit further in this direction is Tin, thus canned food. The noble gasses are the nobles across the table, Nickel, left of Palladium, is used for the poor person (from the US 5 cent coin nicknamed nickel, and bring your nickles for the poor).

To the right is Platinum (rich person), followed by Darmstadtium, which is named after the German city of Darmstadt.

A bit behind Palladium is Molybdenum, with an atomic number of 42, referencing the Hitchhiker's Guide to the Galaxy's answer to everything - 42.

Left of them is Chromium (Cr), right of them is Tungsten (W), together with the o from Molybdenum you get ######crow, which is the black bird hinted at.

The numbers given in the topic, when followed on the numpad, spell out: c2a4d.

At this point, players were expected to figure out how that related to video games. In the original Half-Life, map names were a combination of letters and digits. The level with the map name c2a4d was called Questionable Ethics.

Obviously I had to somehow bring in the Star Fox video game series, as it is one of my all time favourites. However, the regular ones would have been all rather easy, so I took the probably least known game out of it, Star Fox Adventures. A rather unusual game, since it's not a space shooter, but a Legend of Zelda inspired adventure game, and the very last game Rare developed for a Nintendo console.

In this game, you get a very annoying sidekick dinosaur called Tricky, hence the first hint, It's Tricky, by Run DMC. Another hint at the game was All I wanted was having a blast, got lousy staff instead based on the gag that they had to explain why Fox couldn't take his usual blaster along and got a staff as weapon instead. Also Good Luck is what General Pepper says before missions in most Star Fox games.

The dinosaurs had their own language, which was based on a letter shift created in a way that still sounds okay when spoken, which was mostly achieved by not shifting a given amount of letters, but rather replace vowels with other vowels.

The image hinted at that by abusing a well known meme and translating RAWR with the Star Fox dinosaur language, which gave BIGB. If you translated the clue, for example via https://saurian.krystalarchive.com/, you got:

This is the well known Do a barrel roll meme, originating from the N64 Star Fox game where Peppy shouts this at you as a hint.

Translating barrel roll back to dinosaur finally gave you the channel name: ######ruhhochecc.

Putting the audio file from the topic into a spectrogram analyzer yielded a set of emoji characters: 👨🖌️3️ 🅿️🌴

With a little bit of imagination, one arrives at Guy Brush Three P Wood, which, when searched for or remembered, is the name of the protagonist of the Monkey Island games.

Guybrush Threepwood has a middle name, Ulysses. Therefore, the solution channel was: ######ulysses

The penultimate level. The image depicts a Fez, hinting at the game FEZ, a puzzle-platformer. Not immediately visible, but discernible after some modification in an image editor, one comes across hieroglyph-like characters in the top right corner of the image.

The characters are from FEZ's in-game alphabet, and spell out text from the Rosetta Stone after being deciphered: PTOLEMY, THE EVER-LIVING, THE BELOVED OF PTAH, THE GOD EPIPHANES EUCHARISTOS.

Clues: Do you want to win?

Possibly the most complex of this year's puzzles - and the final level.